The Jonkonnu tradition was formed centuries ago and reached its peak during the 18th century when enslaved Africans on sugar plantations and large pens formed Jonkonnu bands as a major part of their Christmas holiday celebration. At first, the bands were encouraged on the estates, but were later suppressed by the authorities due to a fear of the event being a guise under which uprisings could be planned. The authorities discouraged the gatherings of Blacks, as well as the use of drums, and the blowing of horns and conch shells, which were not only a part of the musical elements of the bands but also a means of communication by the enslaved. After emancipation in 1838, Jonkonnu suffered a decline as the nonconformist missionaries tried to get rid of pagan amusements among converts.
Jonkonnnu characters vary across the island, but all characters are traditionally played by men. If the characters speak at all, it will be in hoarse whispers for, as part of the tradition, their identities should not be known. Those who watch the antics displayed by the Jonkonnu are expected to contribute money to the band to defray the cost of their costumes or to provide refreshment for the group.

Items in the Jonkonnu Band Collection 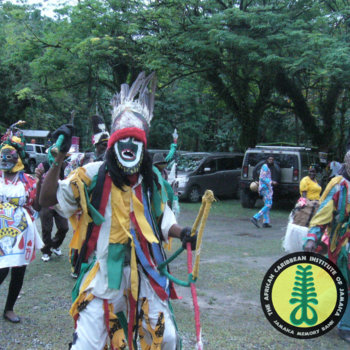